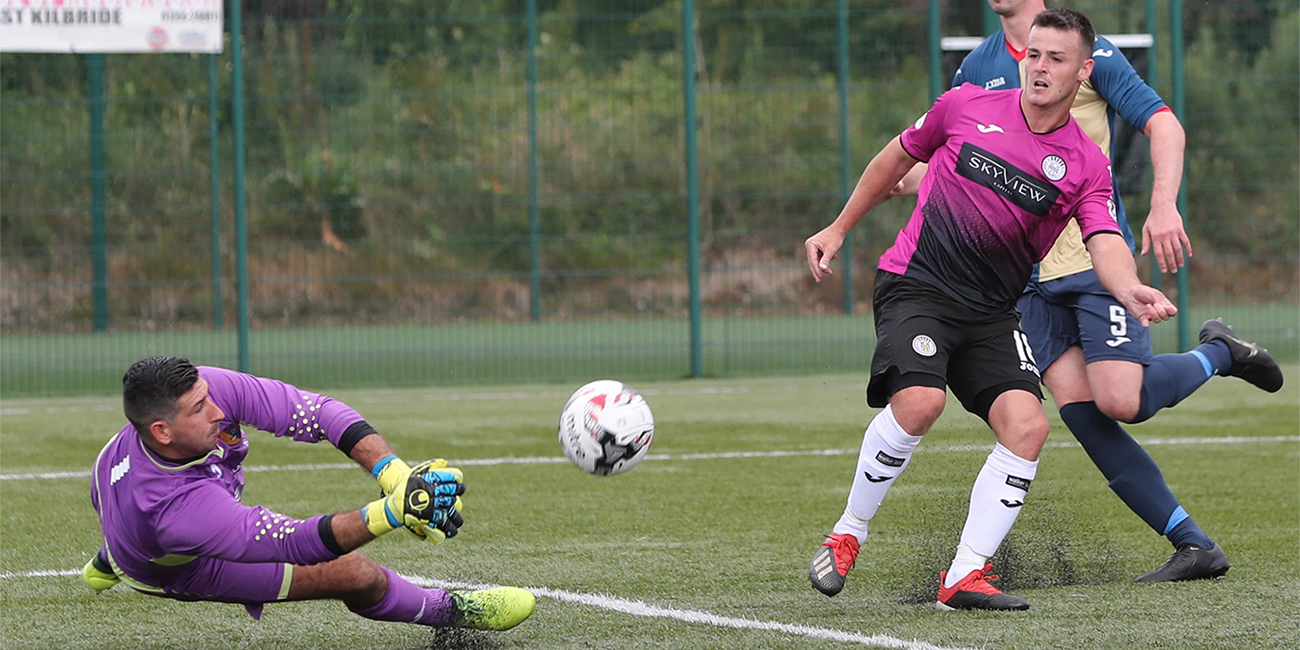 God, what a mess, on the ladder of success

…Where you take one step and miss the whole first rung”

Four games, ten days, sixteen players, one full back, zero first half goals, two goalless draws. Knocked out the League Cup before Boris Johnson has the posters up on the wall of his new bedroom. As I write this, it’s Sunday morning and the shirt printer at the Simple Digital is still unplugged and gathering dust. It would be easy to panic and the weekend’s social media activity provides plenty of bare-bum boxing evidence in that regard.

For me, the feeling is not of panic or fear but frustration. This was supposed to be the stable pre-season after the storm of last year, a Jack Ross 17/18 as opposed to an Alex Rae 16/17. The early rumours about Kearney seemed to be unfounded, the club had a manager with the benefit of momentum and a sterner recruitment structure that would hopefully prevent the season only beginning after the winter break. Genuine fear is now harder to come by, having watched last year’s impending destruction be resolved by cutting the orange wire with 00.01 showing on the timer. In its place, frustration sits stubbornly like heartburn after a post-Viennas trip to Paisley Burgervan.

I generally carry an optimistic outlook on all things St. Mirren, I mostly believe what we’re told and try to focus on the potential positives. Employing someone full time to add additional experience and football knowledge to the backroom setup and prevent a season’s budget being blown on an unbalanced squad, on the face of it, was a promising decision. Even more reassuring, that person knew the club, chairman and domestic game better than most within our reach. The first test of the new setup came in January and even the most doom-mongering buddie would accept that the hit rate on signings was highly impressive. Of the ten reinforcements rounded-up amidst the chaos, arguably six made the difference as first team regulars whilst all played their part when selected. The contrast is stark when compared to the free-reign afforded the last summer’s appointment, and the one remaining recruit attributable to his “network”.
Cody Cooke (St. Mirren v Dunfermline Athletic, July 2019)

However, it’s tough to avoid feeling disappointment at the state we currently appear to be in. Without wanting to devote yet more word count to the Kearney fallout, the saving grace here appeared to be the consistency of having our Technical Director hard at work regardless on sourcing and scouting targets to bulk up and improve a squad which had barely survived the test of last year. Add to that a quick, popular and sensible appointment as new manager and you could be forgiven for expecting business almost as usual. Instead, we sit in wait with only 6 days to go until the season opener, clinging to the faint hope that a squad incapable of breaking down the defensive lines of Coatbridge, Meadowbank & East Kilbride’s finest will come good against a resurgent Hibs at Easter Road.

We have almost all been guilty of weighing in on an ongoing situation that we know little about. Few, if any, outside observers will know the budgetary restraints that the club is operating under and the financial pressures over the last two years which create those shackles. Fewer still will understand the day to day activities of our Technical Director and scouting resources, and the conversations/enquiries/rejections that are being communicated on a daily basis. Therein lies much of the problem for us waiting patiently for silver linings. It’s natural to wonder where the cavalry is coming from when the only visible face of scouting in the club is sitting in the same terrace at K Park, watching the first team being pegged back by a squad incapable of seeing off Cowdenbeath for a place in the fourth tier.

The ongoing journey towards fan-ownership in Paisley, and the growing expectation of social engagement from the club, create a sense of entitlement to detail and explanation. On the most part, in my opinion, this is justified. For better or worse, asking fans to pay for their season ticket, contribute monthly to purchasing the club, membership of social clubs and subscriptions to premium content nurtures a need to understand where this investment is going. Football remains a competitive industry and all but the most ignorant spectators will understand that confidentiality and discretion is key when financial muscle alone will not push through signings. However, the absence of signing activity for weeks on end whilst a half-strength squad bumbles through foot-high hurdles before collapsing short of the finish line creates a vacuum. This vacuum needs to be filled, and fill it we do with 5-tweet threads about Dutch strikers, rants about sitting this season out and occasionally descending into hysteria and personal abuse.

The key issue with the squad as it stands is lack of balance. At the root of four poor performances are players being placed in unnatural positions and expecting there to be no drop in performance across the board.

Paul McGinn, in this author’s eyes, was POTY for the season just gone. A shining and consistent example that graft was the bare minimum required to dig ourselves out of the hole of relegation, and a thoroughly underrated focus of most of our attacking guile. McGinn is then a victim of his own efforts, trusted to deputise at centre half which in turn robs us of his defensive stability at right back and his sizeable contribution in the attacking third. It’s unfortunate that it took an injury to the promising Cammy McPherson, himself out of position, to bring newly-signed teen Nick McAllister into the lineup. McAllister, apparently signed on the strength of his patter towards honking linesmen, gave a good level-headed account of himself at full back and showed signs that he could well have been trusted at centre half against pedestrian opposition.

Ethan Erhahon has faced the Catch 22 of getting his first team break before he’s old enough to order a Venom, at the cost of being hung out to dry at left back for 9 months in a role ignorant of his potential in the middle of the park. It’s dispiriting to hear murmurs of disappointment and criticism from the stands aimed at a talented teen prospect thrust into the spotlight purely for being capable with his left foot. If the long term intention is to shape him in this mould, then positioning and defensive instincts would need to improve in order to survive in the top flight. However, signing a purpose-built left back would solve the dual problems of closing that gap whilst allowing Ethan to kick-start his development in the midfield role which has gained him national team recognition.

The lack of width at the club is a continuing concern, having not found a satisfactory solution since attempting to replace Lewis Morgan with Jeff King. Rumour has it that Alan Stubbs once lost his job at Arnold Clark, unable to understand why customers consistently refused to accept a Nissan Micra as a trade-in for their Jaguar. Oan Djorkaeff has shown flashes of excitement out wide, but is isolated with the lack of support from non-existent full backs or a counterpart on the opposite flank. Cammy Breadner showed the kind of direct teenage bravado in his Coatbridge cameo that suggests he ought to have been let loose earlier in the group.

Lastly, at least in terms of obvious urgency, is added quality up front. Danny Mullen has a well-earned place in both the matchday squad and affections of the West Bank, but is all too often asked to create, support and finish chances alone in enemy territory. Cody Cooke, Dens heroics aside, is yet to convince this season ticket holder that he has the consistency and quality to hold down starting status. His resurrection after the Stubbs exodus is testament to his character and proof that there is something in there, but he’s a firm candidate for third choice in a more balanced squad. Goodwin seems set in having a large, physical presence as his focal point in attack, and one can only hope that this week will bring the announcement of someone over 6 foot in stature, ideally without a double-barrelled name and Birmingham stamp to his Danish passport.

Whilst there are numerous valid criticisms to level at what has been served up thus far, it’s important not to lose sight of where we are. We secured top flight status in May, and we await additions to a squad with four weeks of window-space to play with. With rose-tinted glasses in place, this need only mean that we have the challenge of starting well amidst difficult circumstances. Twelve months ago, we had spent our budget and left ourselves fighting to stay afloat beyond Christmas in a division with two of the worst top flight performances in recent memory.

As others have alluded to, we’re a club with a model that knows all too well the dangers of overreaching ourselves. The temptation to press the panic button and demand funds when times are tough is great, but it can’t be the fall back whenever things go wrong. In some respects, it’s almost reassuring that we haven’t piled in to offer extended contracts to those who’s finest attribute is their availability. Such is the nature of the window and loan market, there will be plenty of opportunity to balance out the squad list in the coming weeks with shorter term options.

We absolutely should hold ourselves to a standard where four poor performances against lower level opposition is never acceptable. However, that’s no reason to lose all faith in pieces falling into place. We’ve seen it all before.