What A Way To Treat A Child! 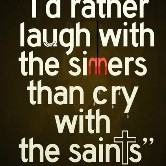